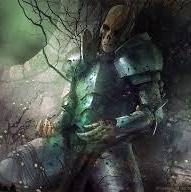 Down the simmering lake, shimmering under the serenity of the moonlit sky. I saw him. Helm crushed, face disfigured, beautiful no more. I saw him. Claymore flown upstream, bent, proud no more. I saw it. Blood slithered on the emerald of grass, on the brown of earth, not red, but dark, scaring darker still, congealed untouched by the water flowing a further from it. Flesh touched by steel but not by shame, never by shame. I saw it. Armor once hung on shoulders strong, hung still on shoulders strong, but taut no more. I saw it.

Promises made, oaths proclaimed. Not broken but failed still. I heard them. I heard them in the silence of the foreboding night, in the overpowering stench of blood and gut, in the glistering light of a sky full of stars, by the river. In the dark of malevolent darkness, holding it’s breathe in sick anticipation of the dawn, when birds would chirp, and light will come bathing everything in radiance of such splendidness. And bathing still this broken, once fearsome Knight. Not caring, not daring, not realizing the dank scene it shines upon. It will shine still. Illuminate still this sorry scene, and soon the fiery sun will take the last of the gleam off the Knight’s armor. Just as Israel took the sparkle out of his eyes, replaced by a somber amusement, mirthful dignity, a contradiction. Screaming death.

And in death, life will reign supreme still. And the Knight’s strong muscle earned and sustained by hard labor, of war, of discipline will provided sustenance still. To the land, and thousand creatures that feed off it, both seen and unseen. Creatures of such wonderful, such magnificent hue.

There will be those who will cry. Surely there will someone who cries, for a Knight in an armor so grand, so glorious. A maiden perhaps. Of hair of gold, and smile brighter than of Elune spying from afar. Perhaps she’ll sing of her loss, with a harp by her side. A song of such heart wrenching sorrow, of such forlorn beauty. That when the light finally withdraws, the heavens themselves will weep for the fallen knight and skies will sparkle, from a thousand new born stars. And the Knight’s soul will transcend to live among the brightest of the lot. Smiling in lugubrious expectancy to be united with his star-crossed lover once more.

The King sitting in his grand hall, tended to by servant bowing so low, and spoken to by advisors bowing lower still. Perhaps he’ll speak of the Knight too. To the people at large or perhaps in private. Talk of his honor, his might, his duty and his fright, that he struck among the heart of his enemies.

No one will come to disturb the knight though, in his finals resting place. Shut away to well-wishers and scavengers alike. In all its cadaverous glory, the Knight will lie among the growing weeds by the river, concealed. Watched over by the river nymph who saw him one day, as he washed sweat and blood off his face, in the river. Took off his scraggy beard with a crude razor to reveal his face, young, handsome, earnestly so, untouched somehow by the blood it had shed, the misery it had brought. War. Of the eyes, haunted, desolated, sad, understanding, understanding too much for one so young. He will stay there, in sweet death, there by the river, by the nymph so nimble, so sweet. And from him a tree will spring. Oak. Binder. A remainder of an oath unfulfilled, a promise abandoned.

You can e-mail me at zaydshah@gmail.com

For the more tech savvy, I am available on SC/IG and twitter @zoydpls